You are reading a Free article. Apply for a subscription to access all the valuable information on the website Sports Law & Taxation
Subscribe to the Sports Law and Taxation Magazine
To subscription-articles

Abuse in Sport: Athletes treated like “pieces of meat”

It is reported that there have been 19 allegations of abuse or neglect of British world-class athletes by coaches since 2017, including 7 such cases this year.

There have also been two allegations of athletes abusing their coaches – one in 2018 and one in 2020.

However, there have been no allegations of physical abuse or sexual activity of under-age athletes.

Olympian Nile Wilson said that British Gymnasts are treated “like pieces of meat.” And a spate of allegations of abuse of British Gymnasts has led to an independent enquiry. See the Post of 8 July 2020 by Ian Blackshaw on the SLT website.

In many cases of abuse, athletes were afraid to report such instances for fear of losing funding or not being selected.

Sally Munday, the Chief Executive of UK Sport said that she was “always concerned” to hear of “unacceptable behaviour” against athletes.

She added that “we take athlete welfare extremely seriously – and we believe that, whenever unacceptable behaviour does occur, it must be reported. While UK Sport does not have the authority to investigate such cases, as an investment agency we need to ensure public funding only supports athletes and staff who uphold high standards of conduct.”

Indeed, one cannot expect anything less!

Prof Dr Ian Blackshaw may be contacted by e-mail at ‘This email address is being protected from spambots. You need JavaScript enabled to view it.’

Issues of the Journal 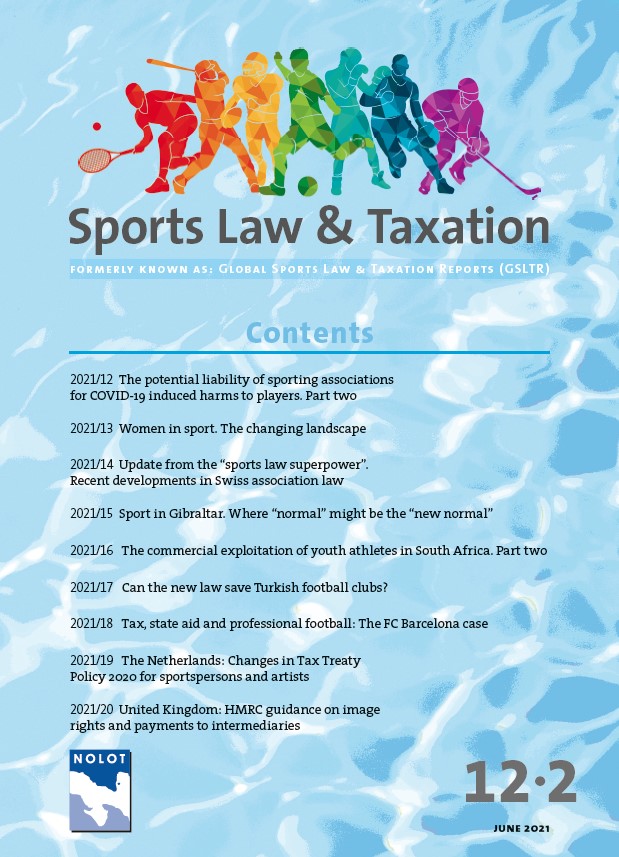 Issues of the Journal

The unique feature of Sports Law & Taxation is that this Journal combines  up-to-date valuable and must-have information on the legal and tax aspects of sport and their interrelationships.

The unique feature of Global Sports Law and Taxation Reports is that this Journal combines for the first time up to-date valuable and must-have information on the legal and tax aspects of sport and their interrelationships.

The editors of  the Journal Sports Law & Taxation are Professor Ian Blackshaw and Dr Rijkele Betten, with specialist contributions from the world's leading practitioners and academics in the sports law and taxation fields.

Nolot BV
St. Jorisstraat 11
5211 HA  's-Hertogenosch
This email address is being protected from spambots. You need JavaScript enabled to view it.